Dear Rebels,   Welcome to this February edition of South East Action Roundup, featuring actions by rebels in our region 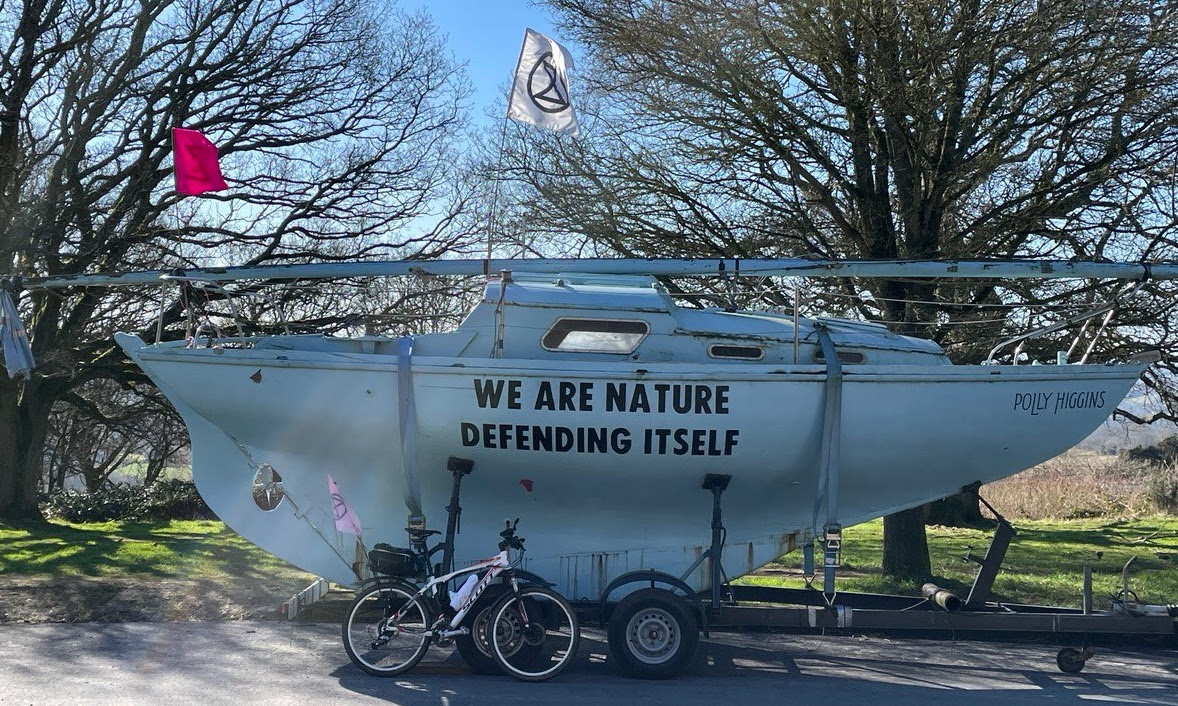 Getting ready for Rebellion on April 9th in Hyde Park!!
Rebels from Godalming, Farnham, Farnborough, Guildford, Woking and Reading, joined forces and set up a stall at the visitor centre. They engaged the public with the presence of the “Polly Higgins” boat, art activities, a climate crisis questionnaire and a lot of long and interesting conversations.

BRIGHTON
No Pensions Without Representation! Rebels joined other climate campaigners in a procession through the streets of Brighton and Hove, to demand that Brighton and Hove City Council have a say over the local government pension scheme. A brighton councillor will bring a proposal to the June meeting of the East Sussex Pension Board as BHCC backs fossil fuel divestment for a third time.   Rebels wore american-revolution-style tricorn hats, 18th century coats and golden sashes as they marched between Brighton town hall and Hove town hall, which is where the meeting was taking place. Banner’s read: “No Pensions Without Representation! It’s time to divest Brighton & Hove’s pensions from fossil fuels.” 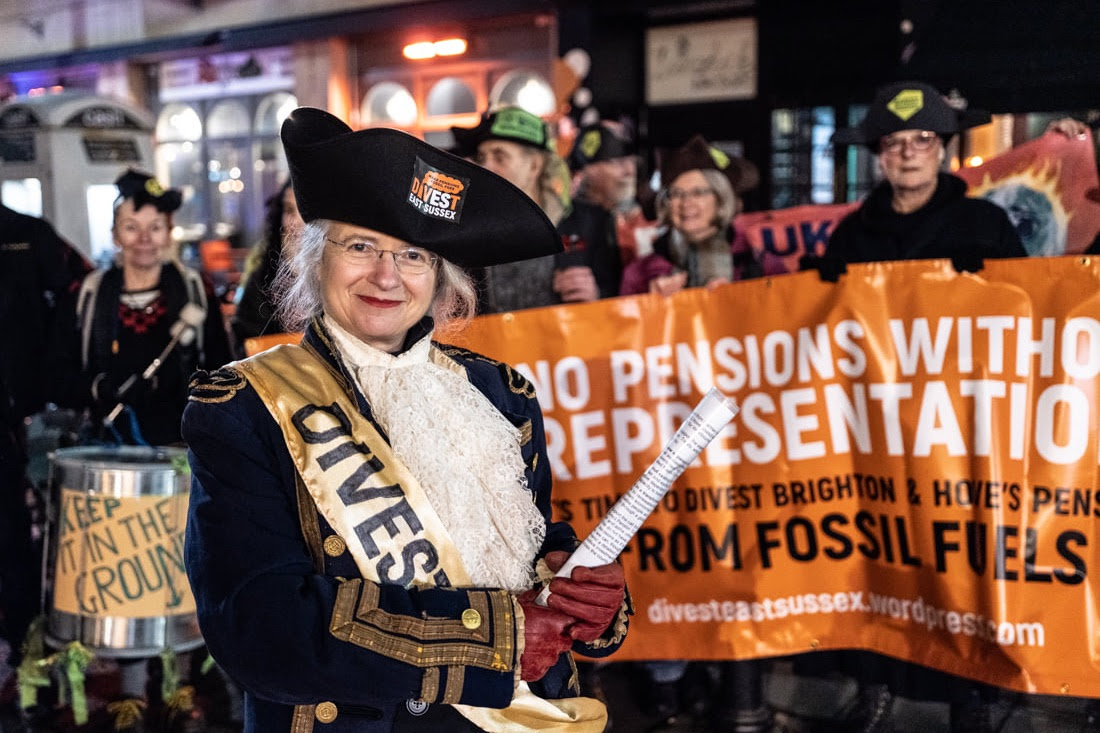 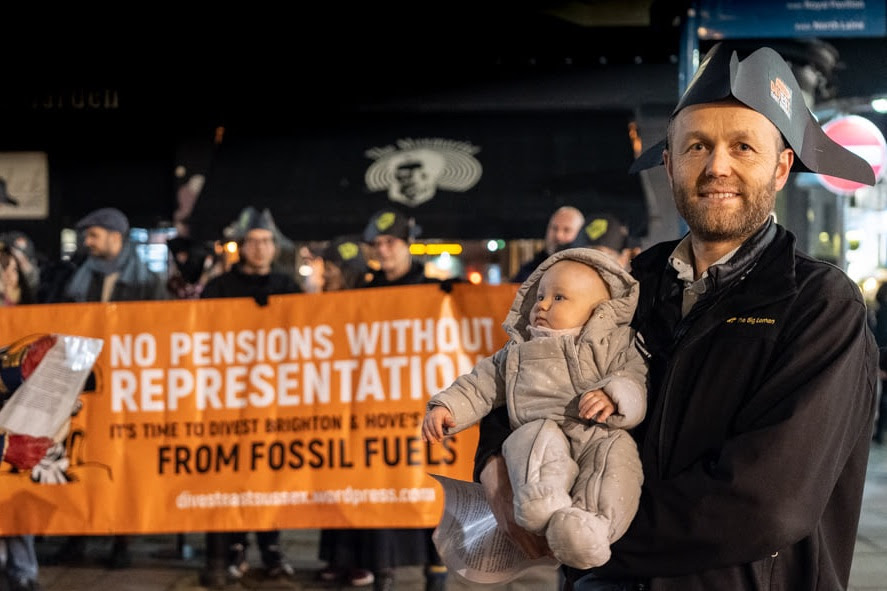 CANTERBURY CLIMATE STRIKE
Canterbury rebels held their regular Friday Climate strike in the middle of Canterbury high street. It was a chance to meet and greet the public and fellow rebels. 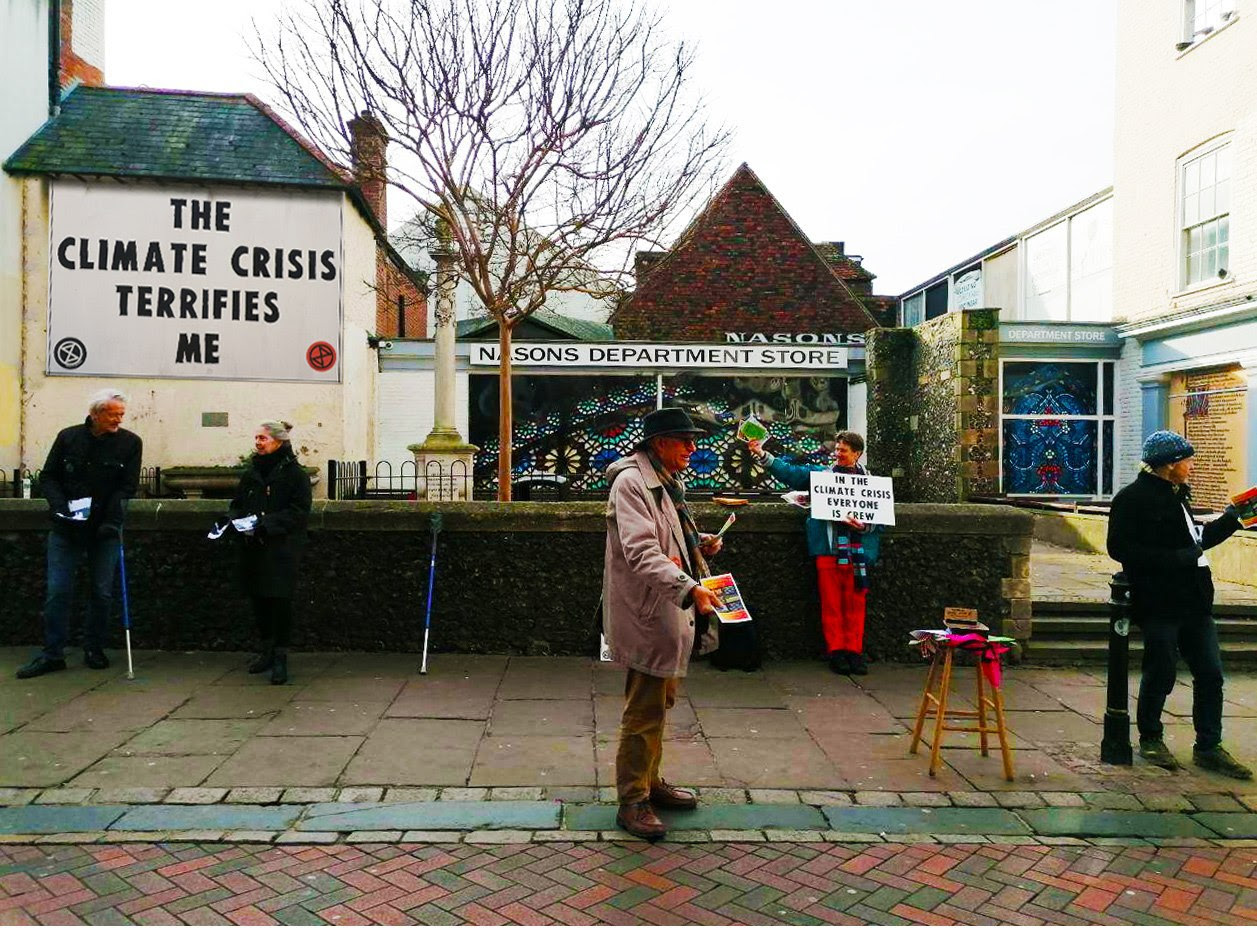 REIGATE & REDHILL AND DORKING BARCLAYS VIGIL
XR Reigate & Redhill and Dorking, along with local members of Christian Climate Action, held a vigil outside the Redhill Barclay’s branch. Several good conversations were had, as part of this nationwide campaign, to raise awareness of Barclay’s continued funding of fossil fuel interests. 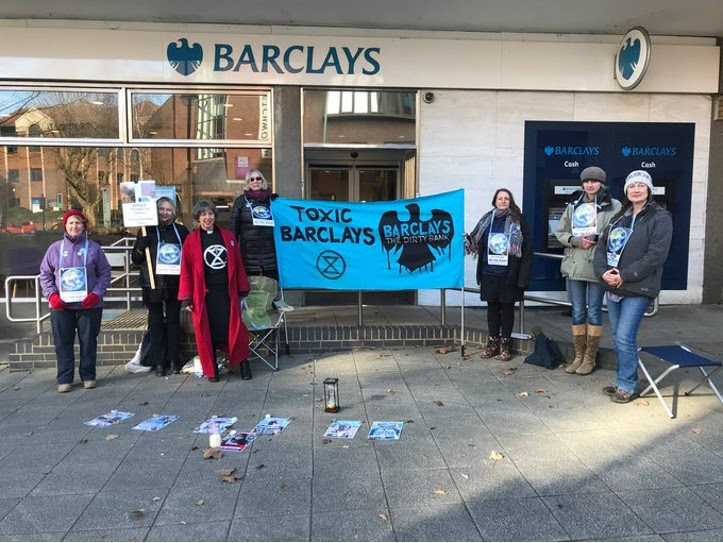 EPSOM & EWELL
“For Peat’s sake!!” Epsom & Ewell XR rebels were in the town centre, with the message that peat needs to stay in peat bogs - and should not be cut and turned into compost. Rebels were asking passers-by buy peat free compost and giving out information about where to get it. 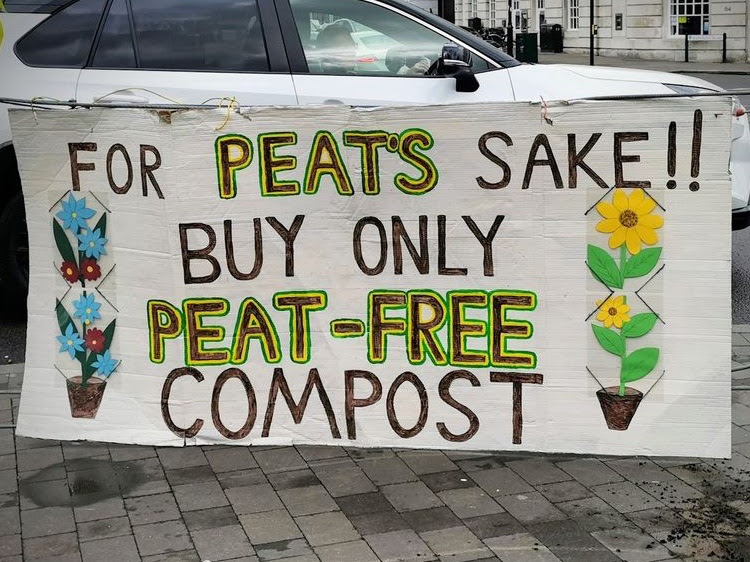 Rebels block Farnborough airport’s main gate   Rebels from surrounding local groups blocked the main gate at Farnborough Airport for two hours.   Some rebels had fake oil poured over them to highlight the polluting nature of the private jets and the damage caused by our high carbon economy.    There was drumming from the samba band and the protest was family friendly, the children present were reminding everyone of how important it is to stop global heating. 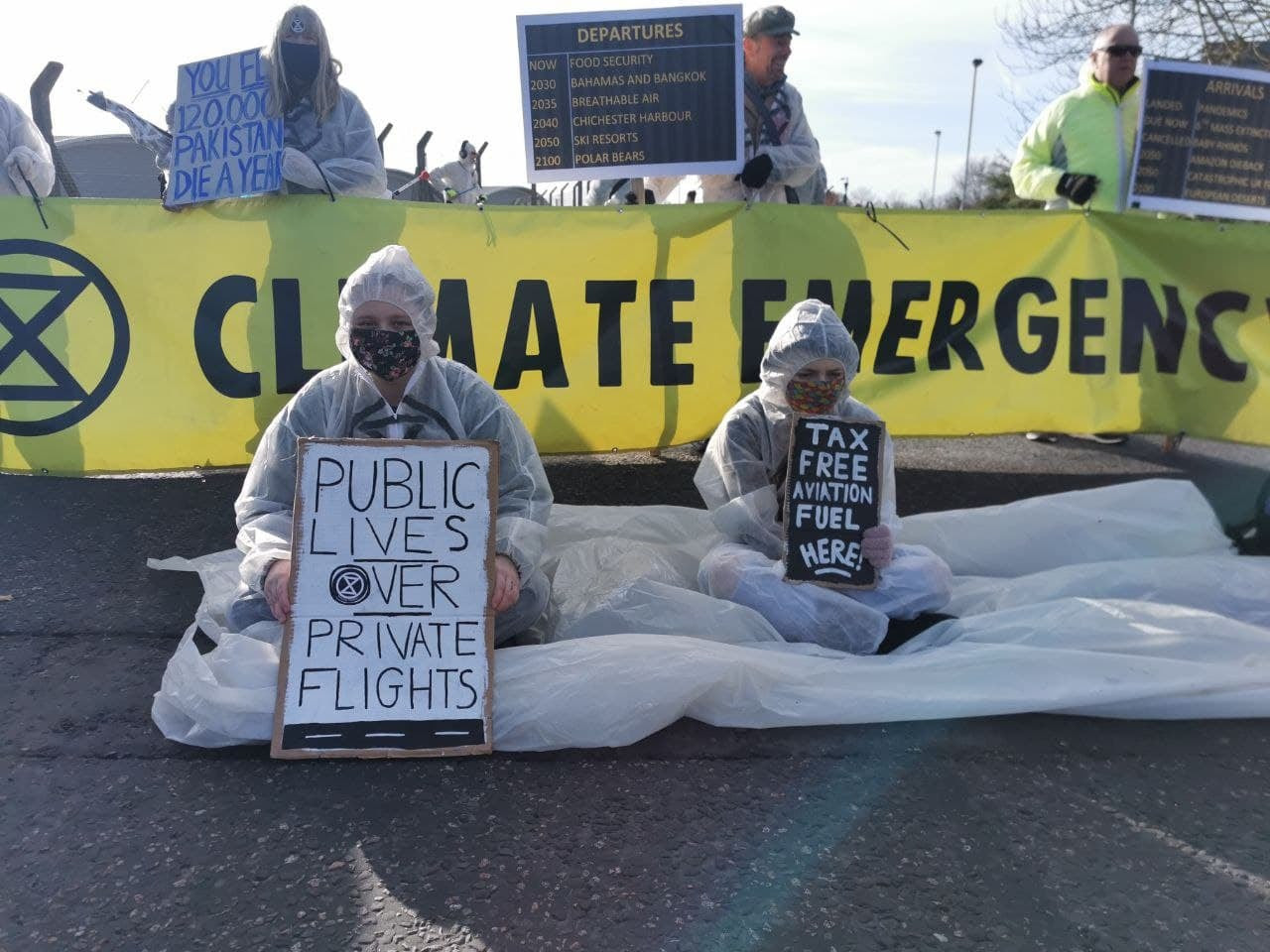 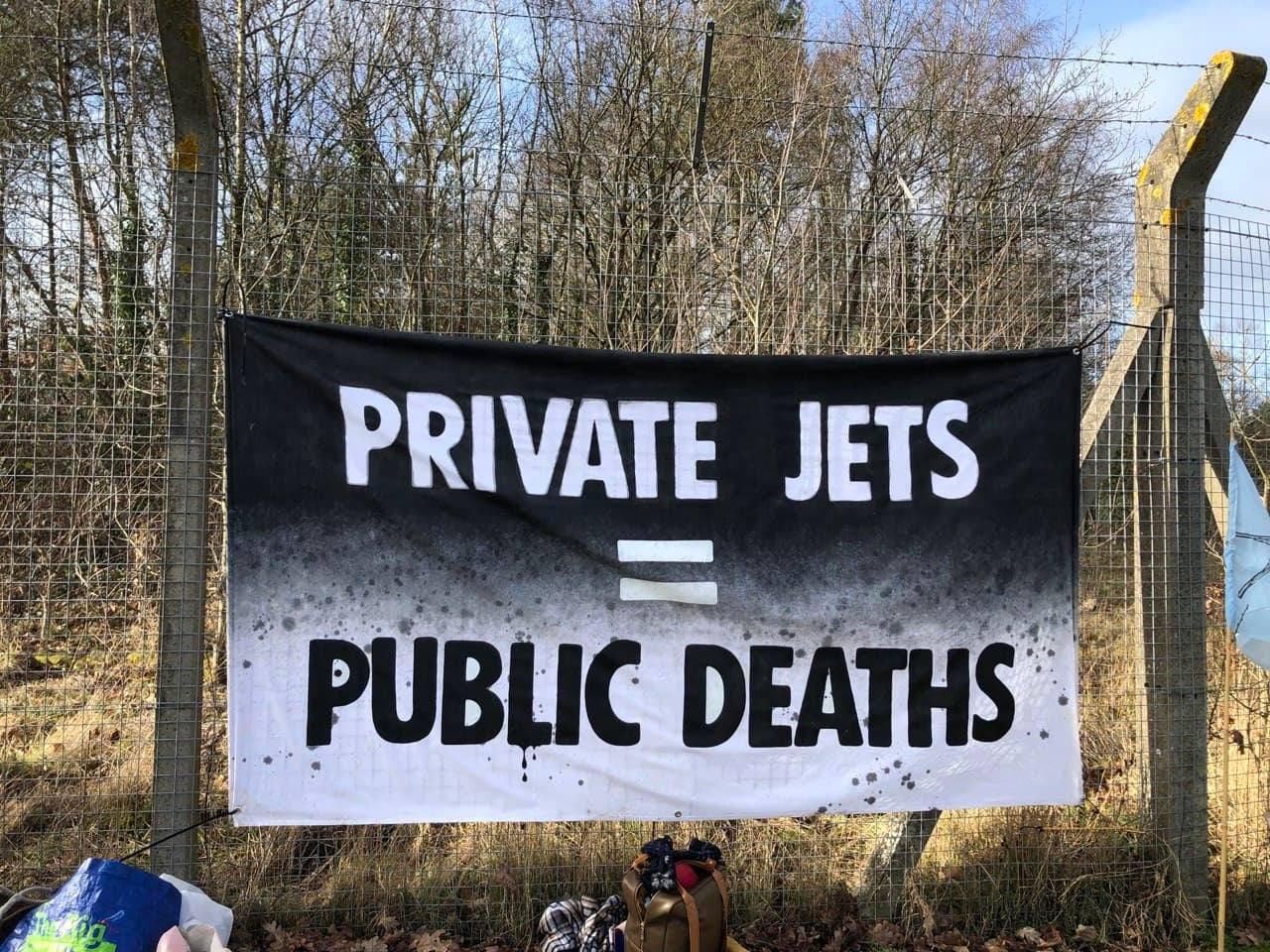 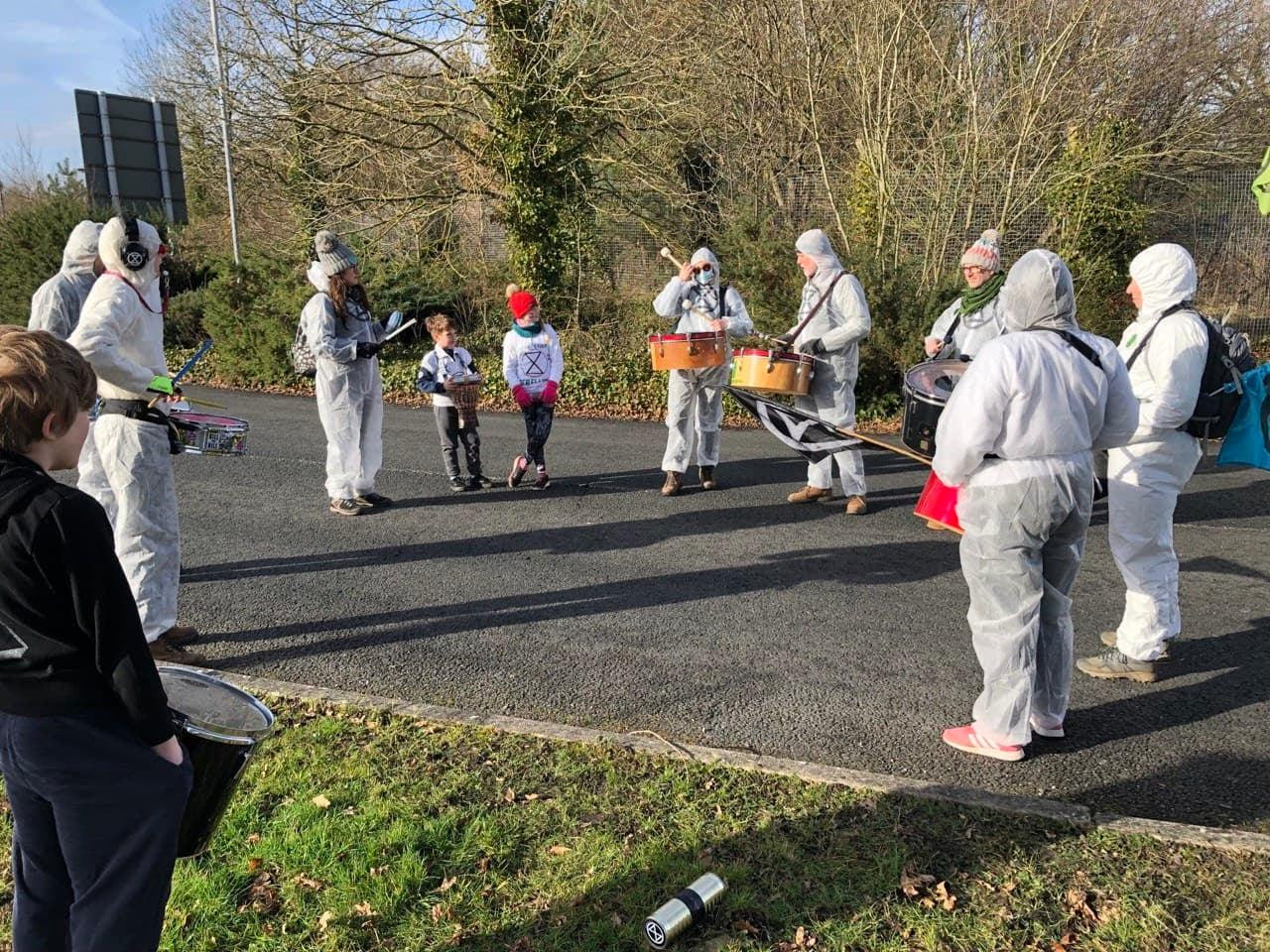 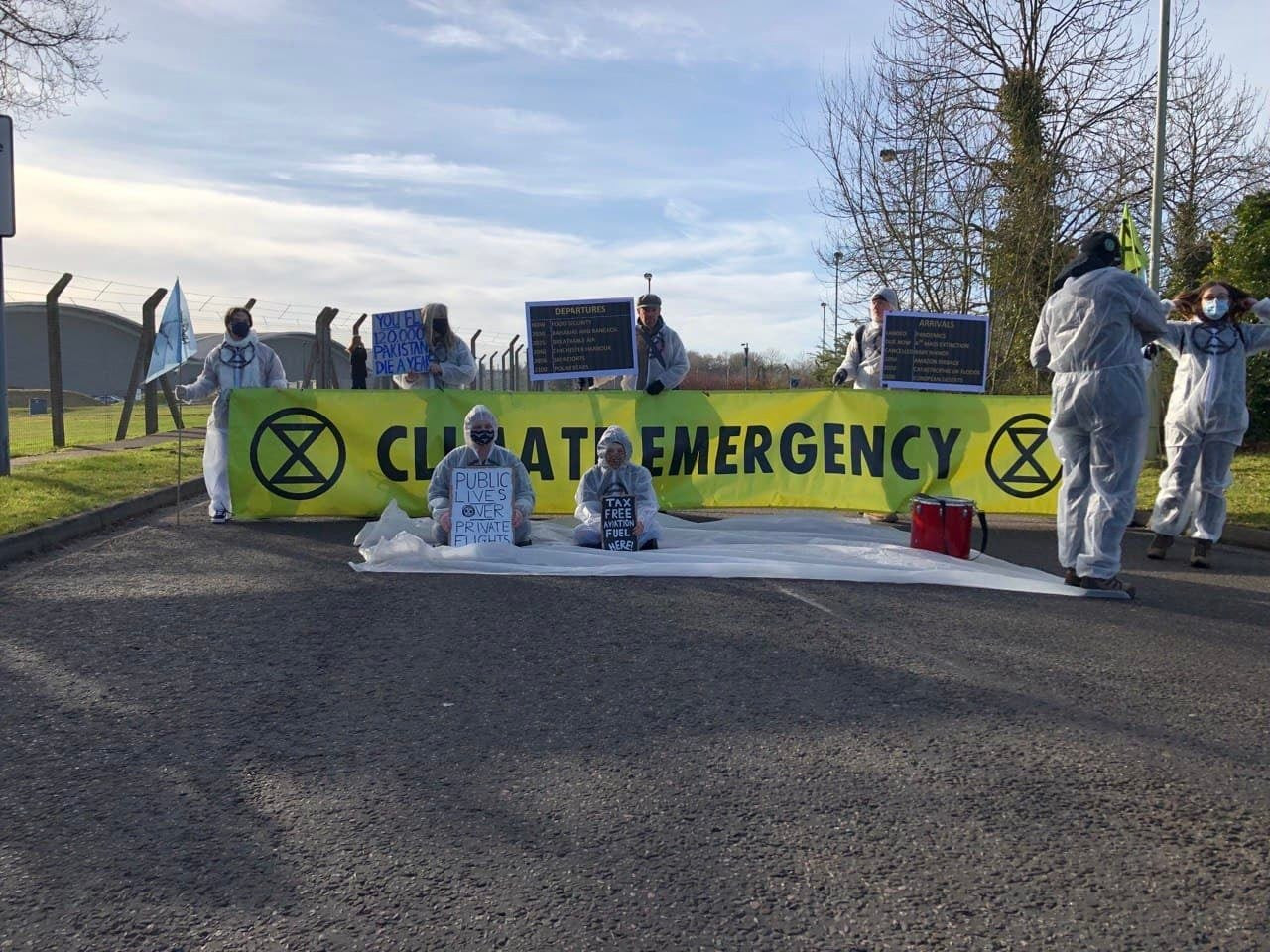 HASTINGS
Hastings Borough Council have "Sat on their hands" - they were held to account for doing too little since they declared a climate emergency 3 years ago. Rebels are calling on their council to step up to their ambitious target of net zero carbon by 2030. In part this is to demand action, but it is also to demand the truth, because it’s time to get real. 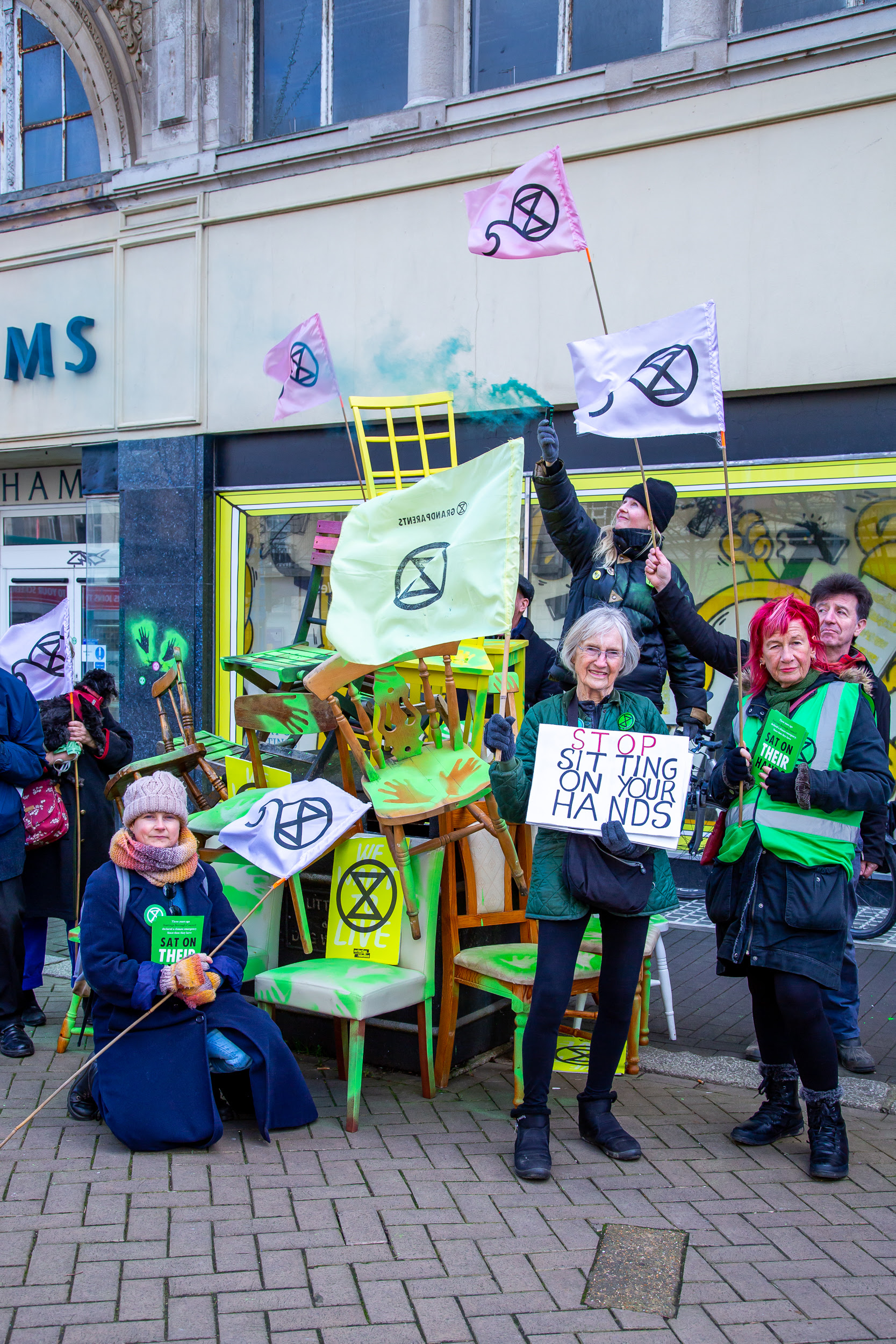 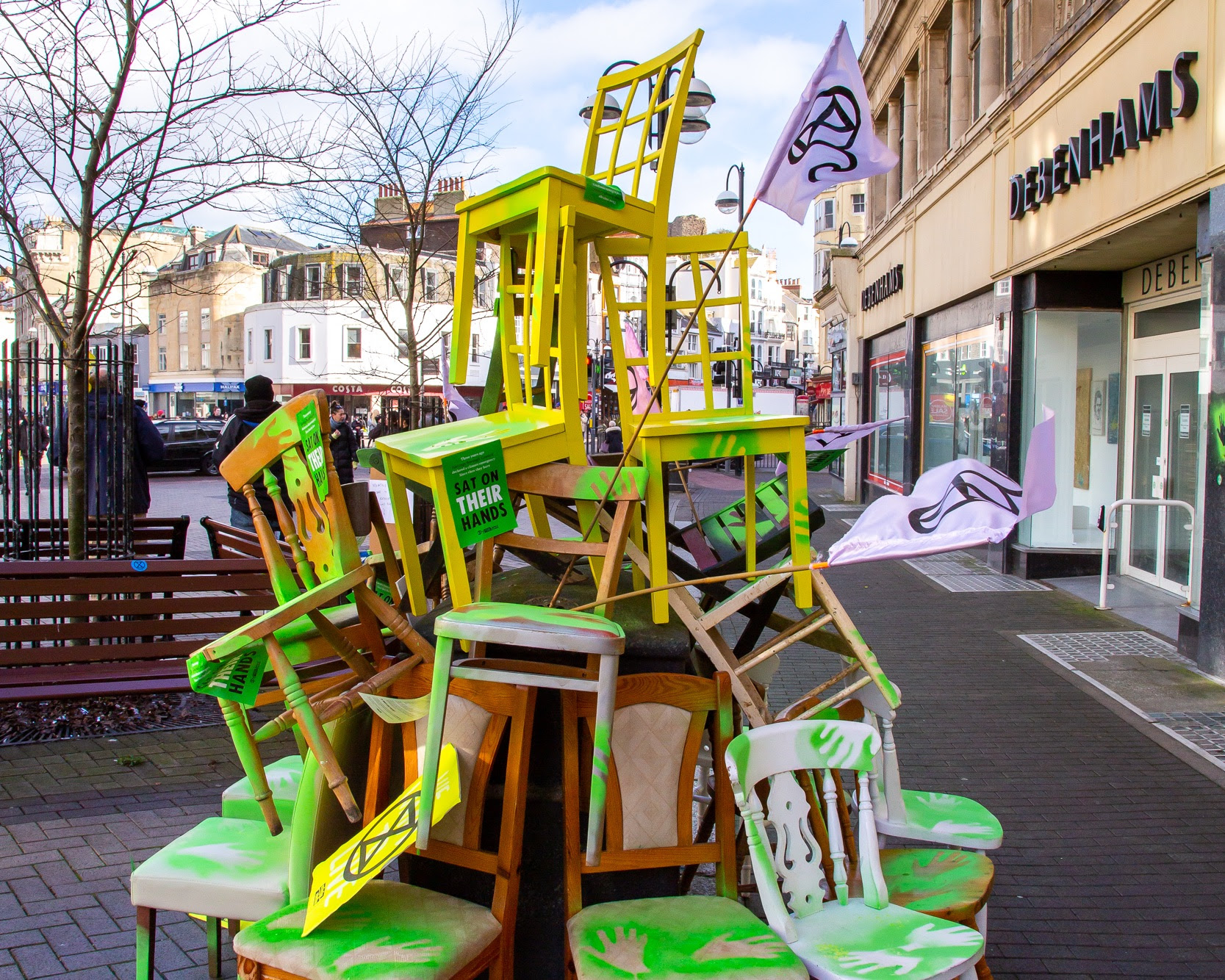 NEWBURY Bank Job!
Rebels braved the rain to protest outside HSBC and Barclays against their continued huge financing of fossil fuels. Oil, coal and gas must stay in the ground if we are to avoid rising temperatures that will threaten life on earth as we know it. The action got great local press coverage too! 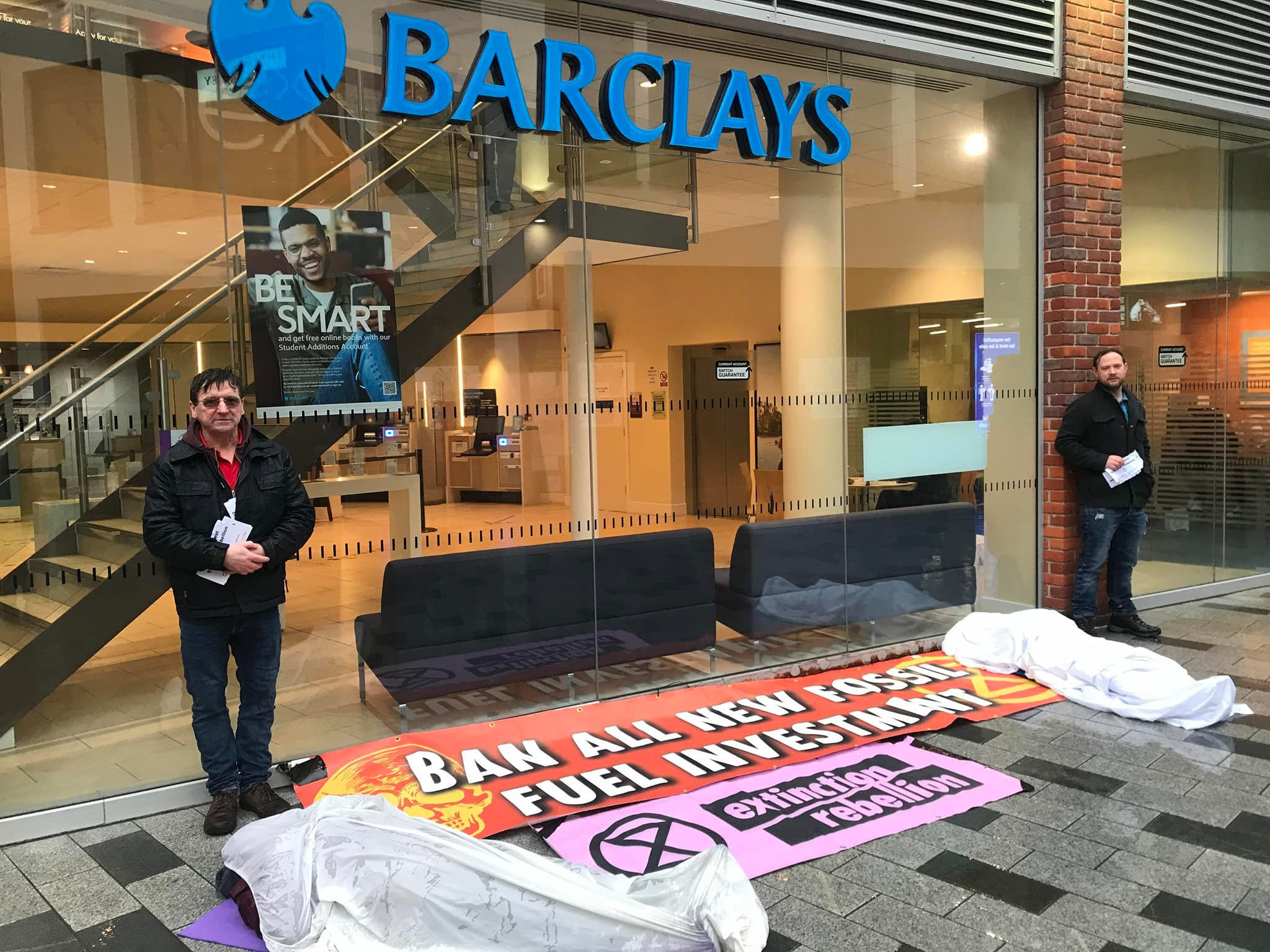 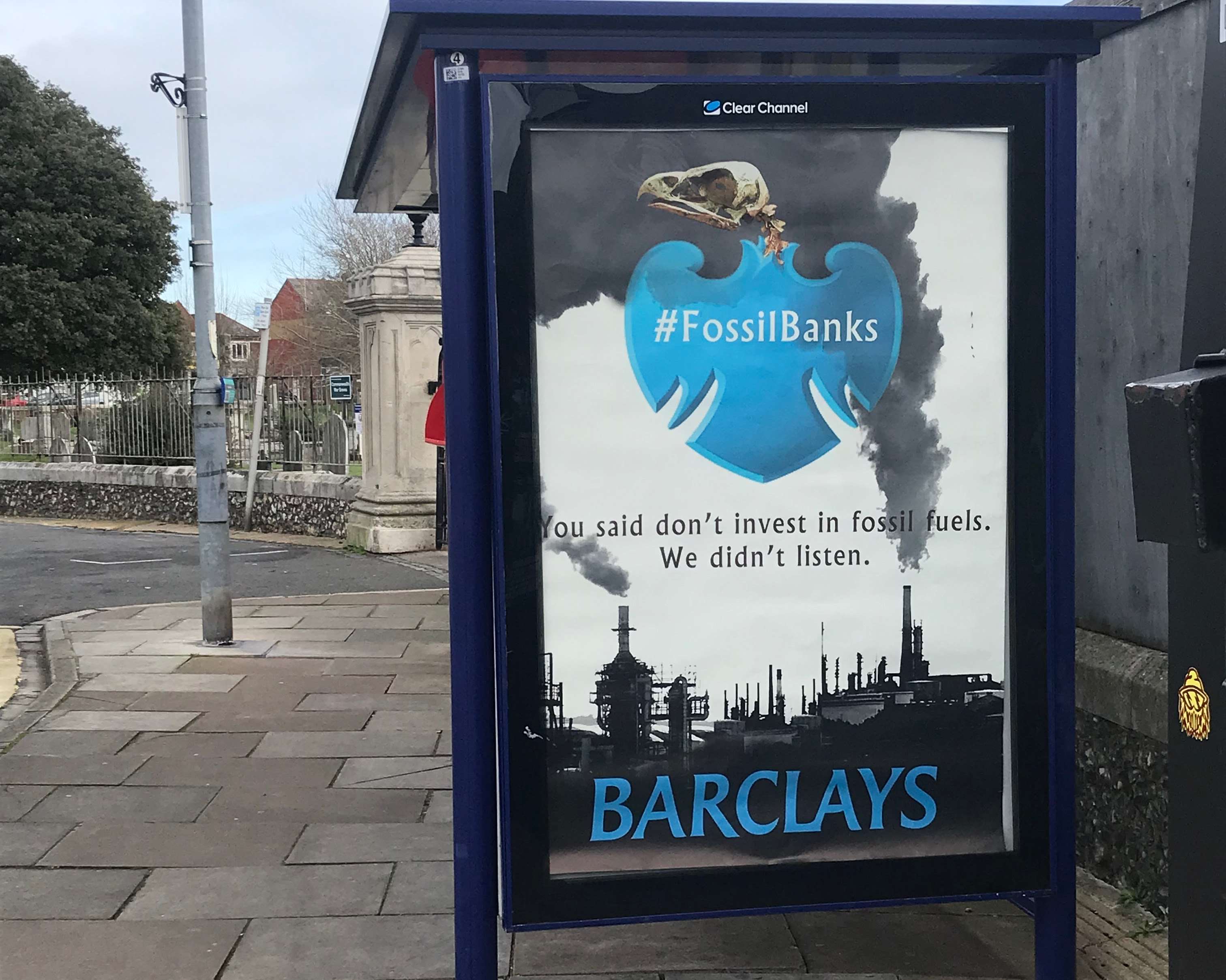 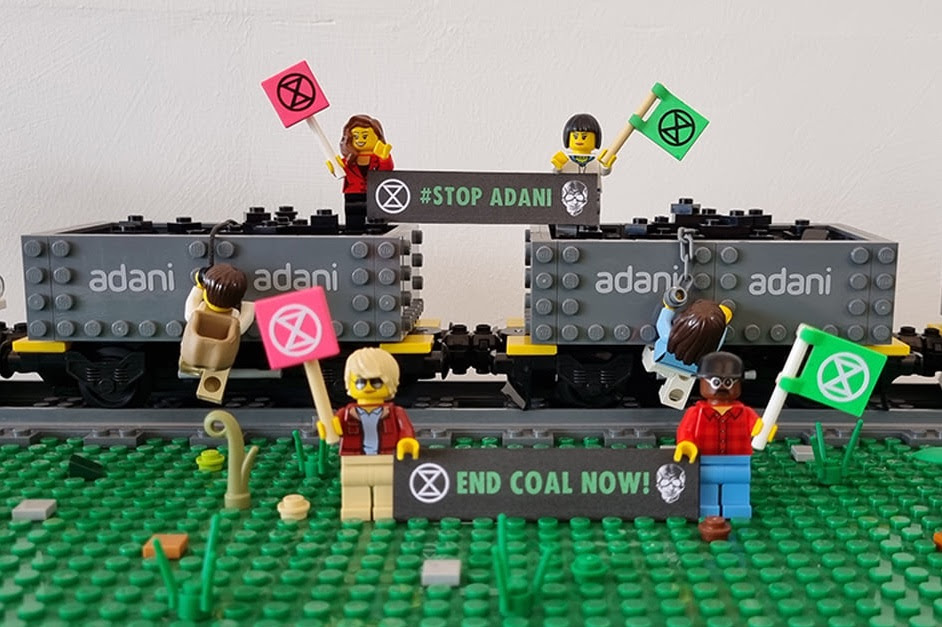 The smallest rebels of Extinction Rebellion have been in action again, they're unstoppable! The Bravus Mining and Resources (previously known as Adani) train full of coal was no problem to Lego Rebellion. 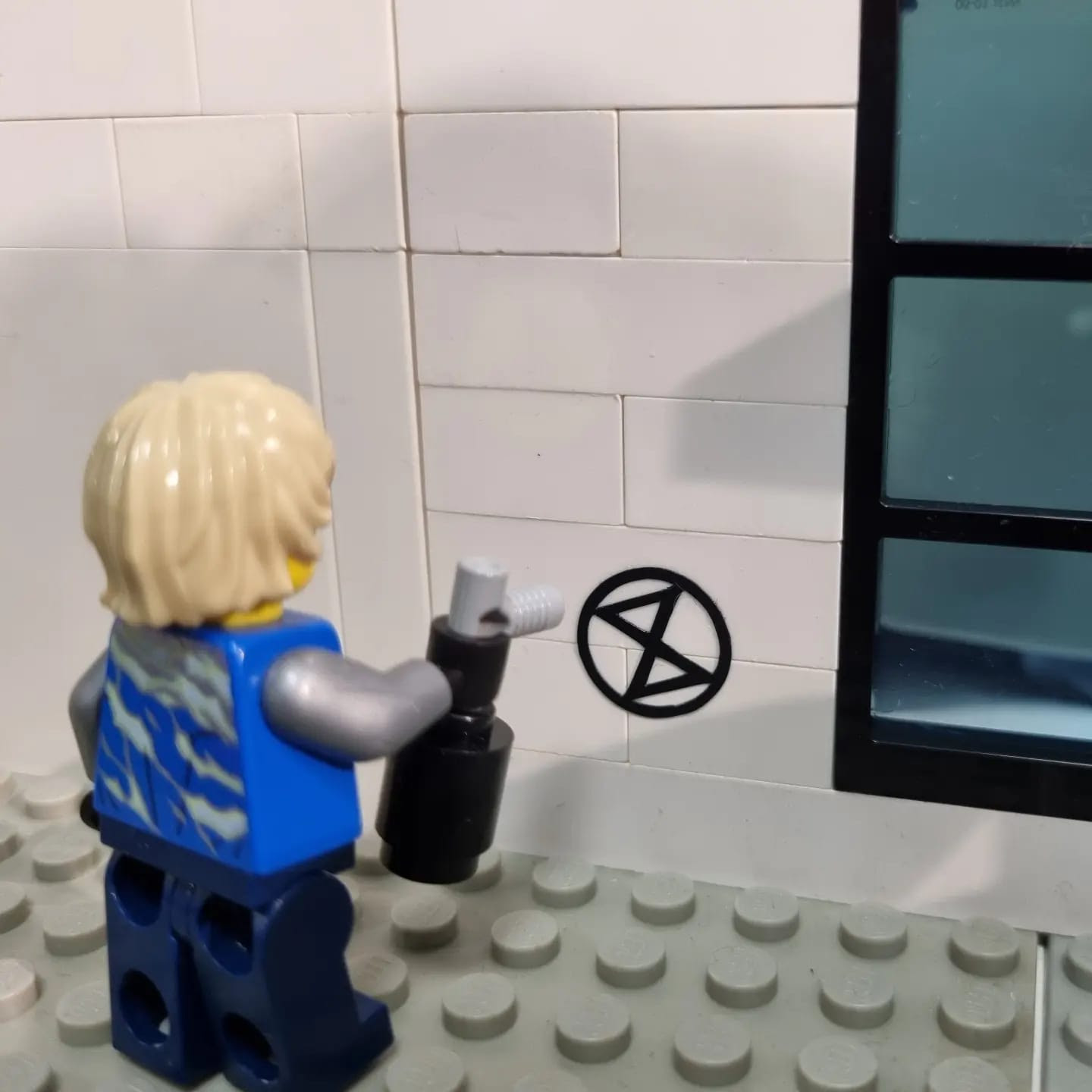 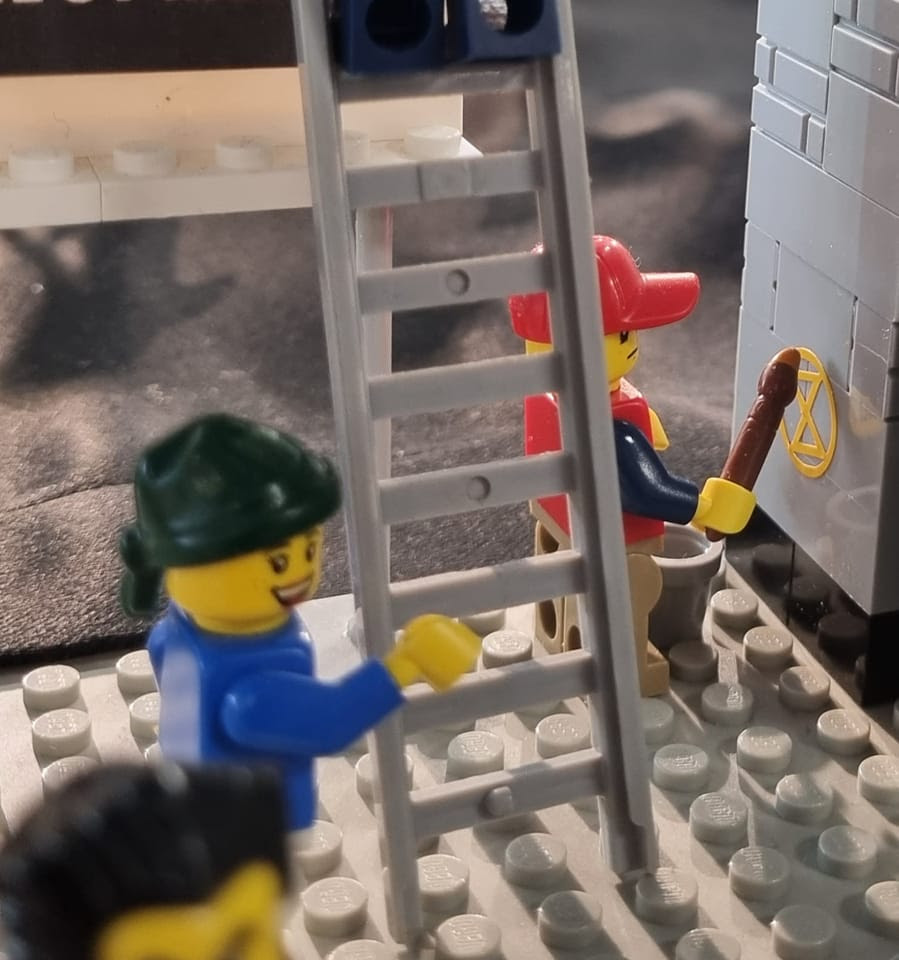 REMEMBER : No-one is too small to make a difference!

Thanks for rebelling and reading.  See you on the streets again some time...
Love and Rage,  South East Anchor Circle

Mass action across London targeting web of organisations propping up the fossil fuel economy ·        Thirteen sites hit, including those of BP, JP Morgan, the Institute of Economic Affairs, BAE Systems and the Church Of England  ·        Protestors call for organisations to CUT THE TIES with the fossil fuel […]

Scientists and young climate campaigners are barricading multiple private airports across thirteen countries today (10 November), including Farnborough Airport  and London Luton Airport’s Harrods Terminal, to demand a total ban on all private jets and a tax on frequent flyers.

This is a real warning from the United Nations Intergovernmental Panel on Climate Change. What does this mean? Extreme weather events happening more frequently and more severely. crops failing around the world, prices rising in our supermarkets and huge swathes of our planet becoming unliveable. In our hearts, we all know that the balance of […]

Amazon’s fulfilment centre at Dartford, Kent is being blocked by climate activists who are disrupting the company’s business on its busiest day of the year. The action is intended to draw attention to Amazon’s exploitation of its workers and environmentally destructive and wasteful business practices on Black Friday.

Farnborough airport barricaded by activists locked to a stretch limousine, fuel barrels and a giant steel tripod in call for polluter elite to cut their emissions Extinction Rebellion activists have blocked all major entrances to Farnborough Airport in Hampshire today (2nd October) to protest against the shockingly high levels of CO2 that private flights emit per […]